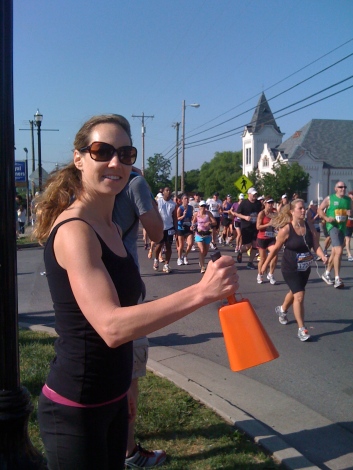 Through the years I have participated and competed in numerous races.  I’ve done 5Ks, marathons, 200 mile relays, a few duathlons, a couple one mile races and more!  One thing I haven’t really done though, is participated as a spectator. This year some issues with my running prevented me from participating in Nashville’s Country Music Marathon and Half Marathon. This race is huge and runs right by my street. I knew several folks who would be running so I decided to try my hand as a spectator.

Well, let me tell you not only was it a lot of fun but I also learned a lot. Apparently there is more to being a good spectator than just showing up! I figured I’d share my lessons learned as a race spectator so you too can be prepared in the future!

1.  If you show up with cowbell (as I did) – runners will expect you to ring it the whole time!  I was a spectator for about 2 hours – that’s a lot of bell ringing.  I’ll admit my arm and wrist got a little tired so I took some breaks.  No less than 1/2 dozen runners called me out for my slacking off with requests for “More cowbell please!”

*Side note- I think the cowbell could possibly rival the shake weight for a good arm workout … look for my infomercial “Cowbell Your Way to Better Arms” coming soon!

2. Mimosa’s are Good!  – At least it sure looked like the crew across the street from us with their fancy tent, table, vase of flowers, stemware and mimosa’s were having a great time. It never occurred to my little crew that we should have planned and catered our spectating!  Next time!!

3.  Wardrobe is Key! – One of the folks in my crew was wearing a Pittsburgh Steelers shirt and I can’t even tell you how many runners high-fived him!  Apparently there are a lot of not bright runners out there 😉  Next time I’ll do my Bengals the honor of representing!! 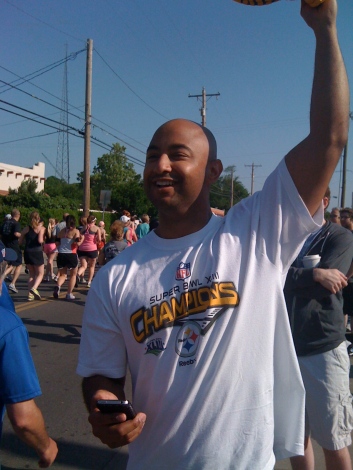 4.  Finding friends is harder than finding a needle in a haystack!  – I knew quite a few folks running and yet it was difficult to find them in the mix. Often times they spotted us before we spotted them! It might have helped to know what color shirt or hat to look for but with 35,000 people running by it’s still not the easiest to spot one specific person!

5. Forget Photos!- It’s a nice idea to tell your friends you’ll take pictures of them.  But it’s just that an idea. Let me break it down for you – if you happen to notice your friend, get the camera out and attempt to take a photo – you will most likely get their backside or another runner who cuts in front of your shot!  The poor guy next to me must have tried to capture a dozen folks. He accomplished six rear end shots and about six complete misses.  They have professional photographers on the course for a reason!

6. Prepare to be Entertained! – You just don’t know what you might see out there. We witnessed a 10 person dragon, identical twins in matching all white suits, a guy running in loafers, a juggler, many cowboys and cowgirls, people running and talking on cell phones, and Elvis too. This was not even a race known for it’s costumes.

7. Clever Signs are Key! – We saw several signs cheering on family and friends or supporting a charity.  Then we also so these noteworthy signs. 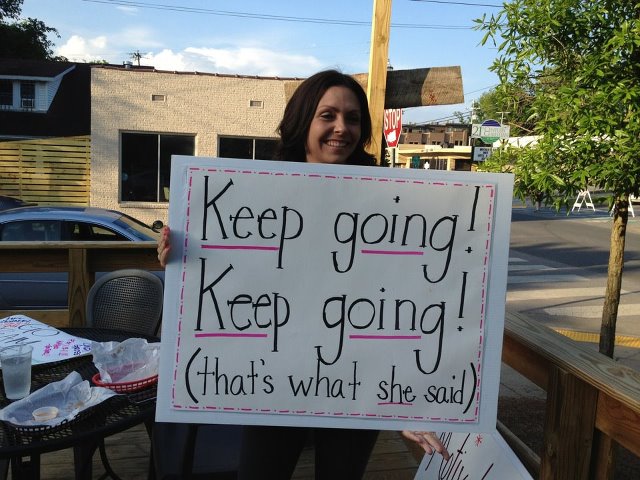 7.  Prepare to be Inspired! – Of course there were the elite runners and it’s exciting to see such talent and speed. They make it look effortless. What I found more inspiring, however, were all the other runners.  They came in all shapes and sizes and each had their own gait.  Some folks made it look easy and others made it look downright miserable. None the less – they were all out there doing it. It  just goes to show – just about anybody can be a runner if they are willing to make the effort.  We were standing by the 7 mile marker and at 2 hours there were still so many folks coming through. The race is not just to the swift but to everyone that shows up and runs it.

Being a spectator was even more fun than I could have imagined!  It was inspiring and motivating, too! I know the runners appreciated the support on this hot day but I also appreciated what they were doing.  If you get the chance to be a spectator – take it!  You won’t regret it!!

Lucie is PMA certified Pilates Instructor with specializations in prenatal and post-partum Pilates as well as the use of Pilates as therapy for back pain, injuries and chronic conditions. She loves the challenge of teaching all types of bodies and helping her students achieve their goals. With Pilates, Lucie is able to help her students find their core and create balance and symmetry in their bodies. Lucie has been teaching group and private exercise sessions for more than 15 years. She has found that Pilates is a great compliment to many other athletic pursuits as it lengthens, stretches, and rehabilitates the body. Lucie owns 12South Pilates in Nashville, TN and offers private, duet, trio, group equipment Pilates classes at her studio. She also holds certifications in TRX, Spinning, and is an ACE Certified Personal Trainer. Lucie was a college athlete competing in track and cross country. View all posts by 12South Pilates & Personal Training